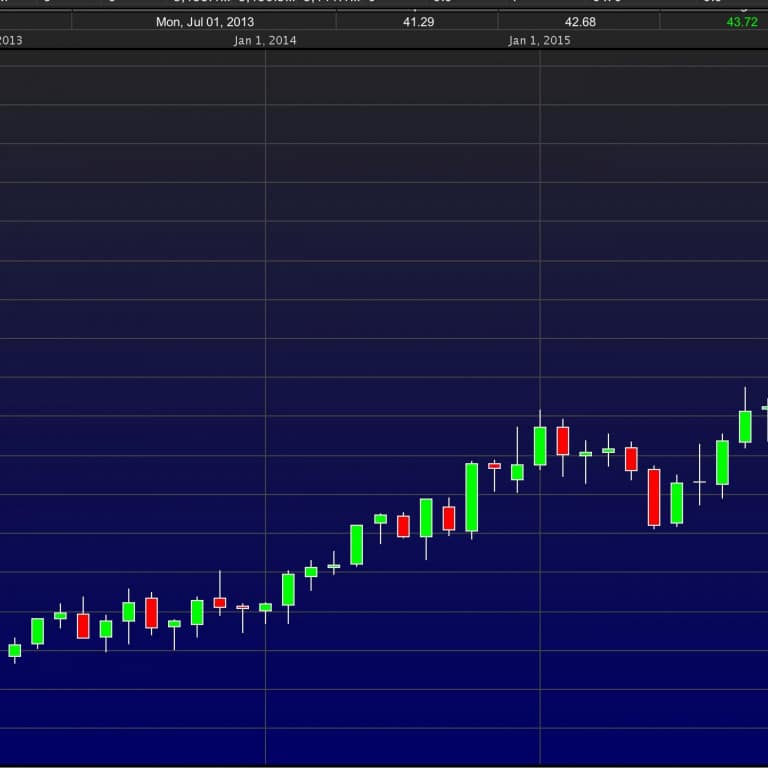 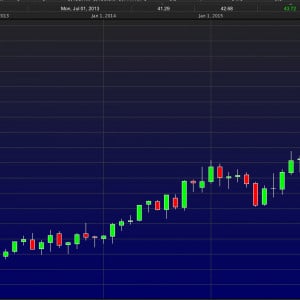 A year ago we were watching the movie, “The Big Short” a movie about four investors who made huge profits from the financial apocalypse of the mortgage industry. In this zero sum game of investing they earned millions while the world lost. The last line of the movie was particularly upsetting. It was a clue to viewers about where one investor in the movie who just made millions of dollars from crisis was looking to invest next:

“Michael Burry is focusing all of his trading on one commodity: Water.”

I started this series of articles back in 2012 with the intention of increasing awareness of water scarcity, potentially increase capital for water infrastructure and provide an opportunity to do more than just complain about rising water prices. Some options to help eliminate a water crisis. We have been following a portfolio of stocks and ETFs for 6 years now and 2016 has been another good year for most of these water stocks.

Year to date the Dow Jones Industrial Average is up 14% for the year. The Nasdaq is up 9% and the Standard and Poor’s 500 is up 11%. All considered great gains for a year. These same indexes were basically flat last year. Let’s take a look at how the companies (associated with water) identified in January 2012 performed.

American Water Works Co. Inc. (NYSE: AWK): This stock was up 21% in 2016 Closing at 72.88 December 16, 2016. This stock is up about 150% during the last 6 years. I’m not sure where else we could have found such good gains in the past six years in such a conservative industry. American Water Works provides water and wastewater services to 15 million people in 30 U.S. states and parts of Canada. 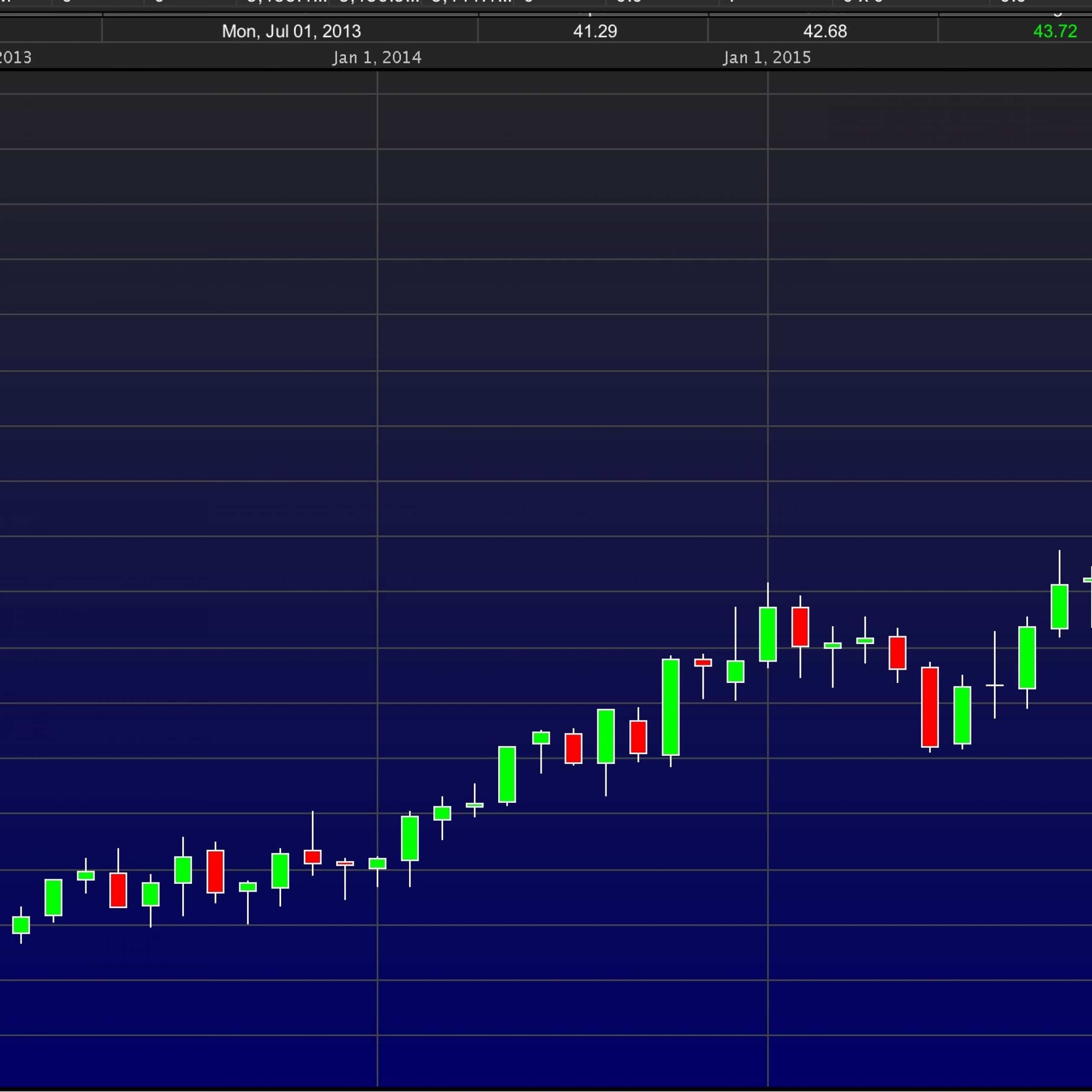 Aqua America Inc. (NYSE: WTR): Gained 1% this year after gaining 10% last year. Aqua America is a holding company for a group of regulated utilities serving 3 million customers in 13 states ranging from Texas to Maine. This is almost a 70% return for the past six years. 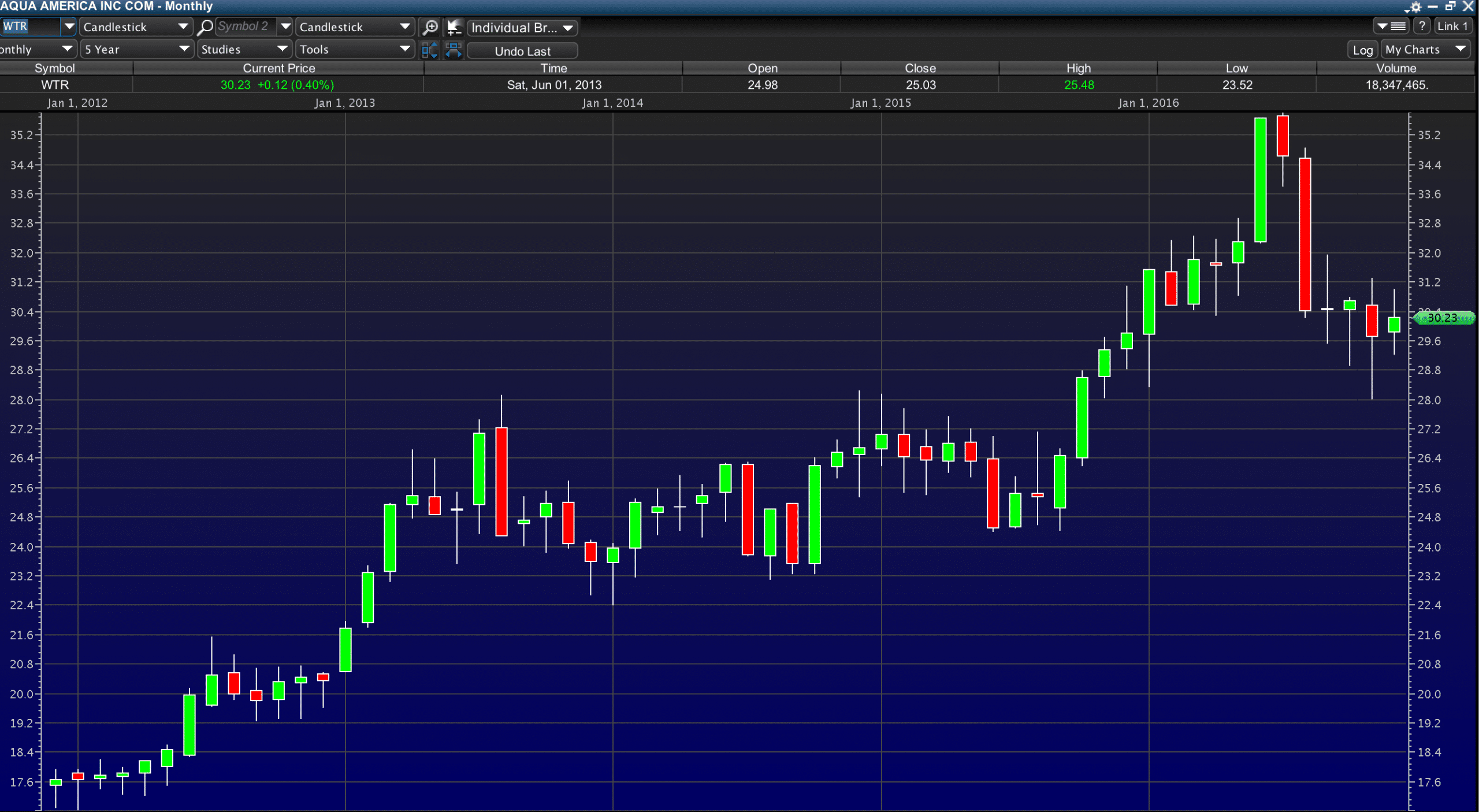 California Water Service Group (NYSE: CWT): This water company is a utility that serves California, Washington, New Mexico, and Hawaii, and American States Water Co. This stock is an example of there is no such thing as a sure thing. It has been an under performer in the group in 2015 down 8.5%. In 2015 California Water Service Group learned first hand what the drought in California means for revenue. A large majority of their revenue comes from states hit hard with drought while their operating expenses rose slightly, with higher labor costs, drought program and conservation expenses. In 2016 it made up for poor past performance turning in the biggest gain, up 48%. Over the last 6 years it has gained 78%. 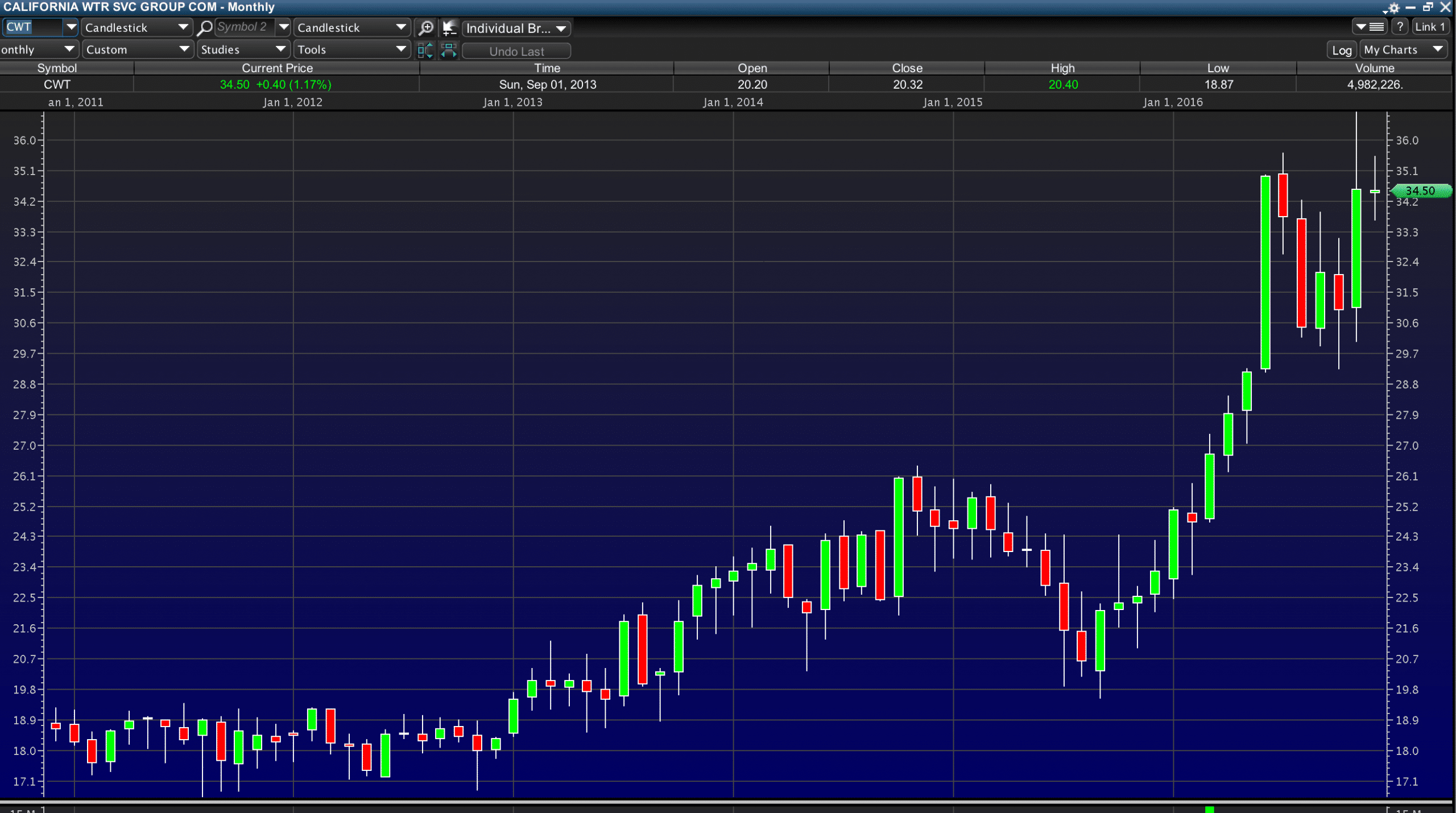 American States Water Company (NYSE: AWR): This California-based utility provides water, electric, and contracted services in the United States. In 2016 it saw gains of 8% after rising 22% in 2015. During the past six years this stock is up 145% and been a top performer of the group and is diversified across the United States. 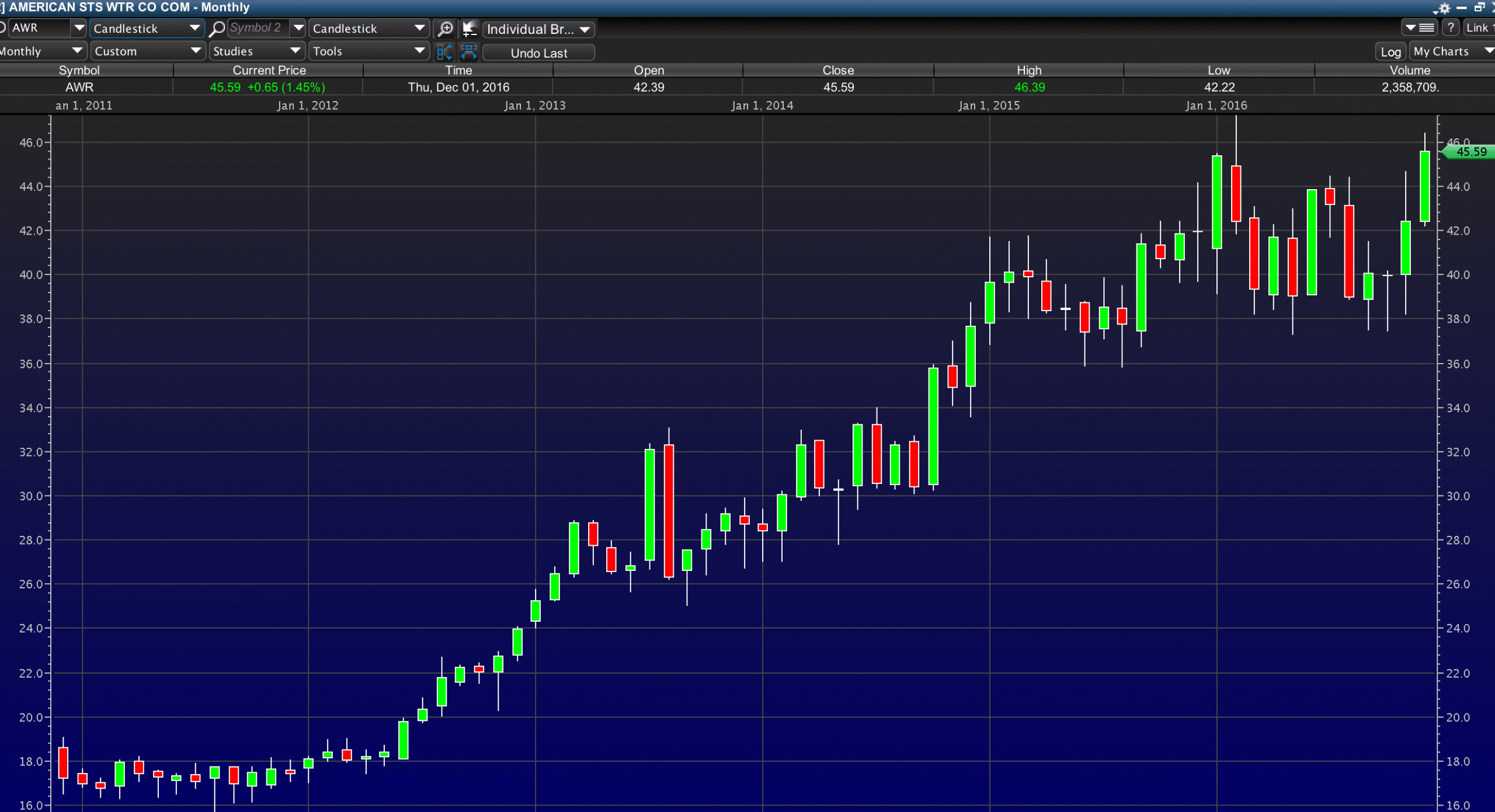 Another option to invest in water is  Exchange Traded Funds (ETF). Think of an exchange-traded fund as a mutual fund that trades on a public exchange, like the New York Stock Exchange. You get the diversification of a fund with the added benefit of the liquidity of a public exchange.

PowerShares Global Water Portfolio (PIO): This ETF is based on the Palisades Global Water Index. It focuses on companies providing potable water. This year the ETF was down 1% after finishing down 8% last year. 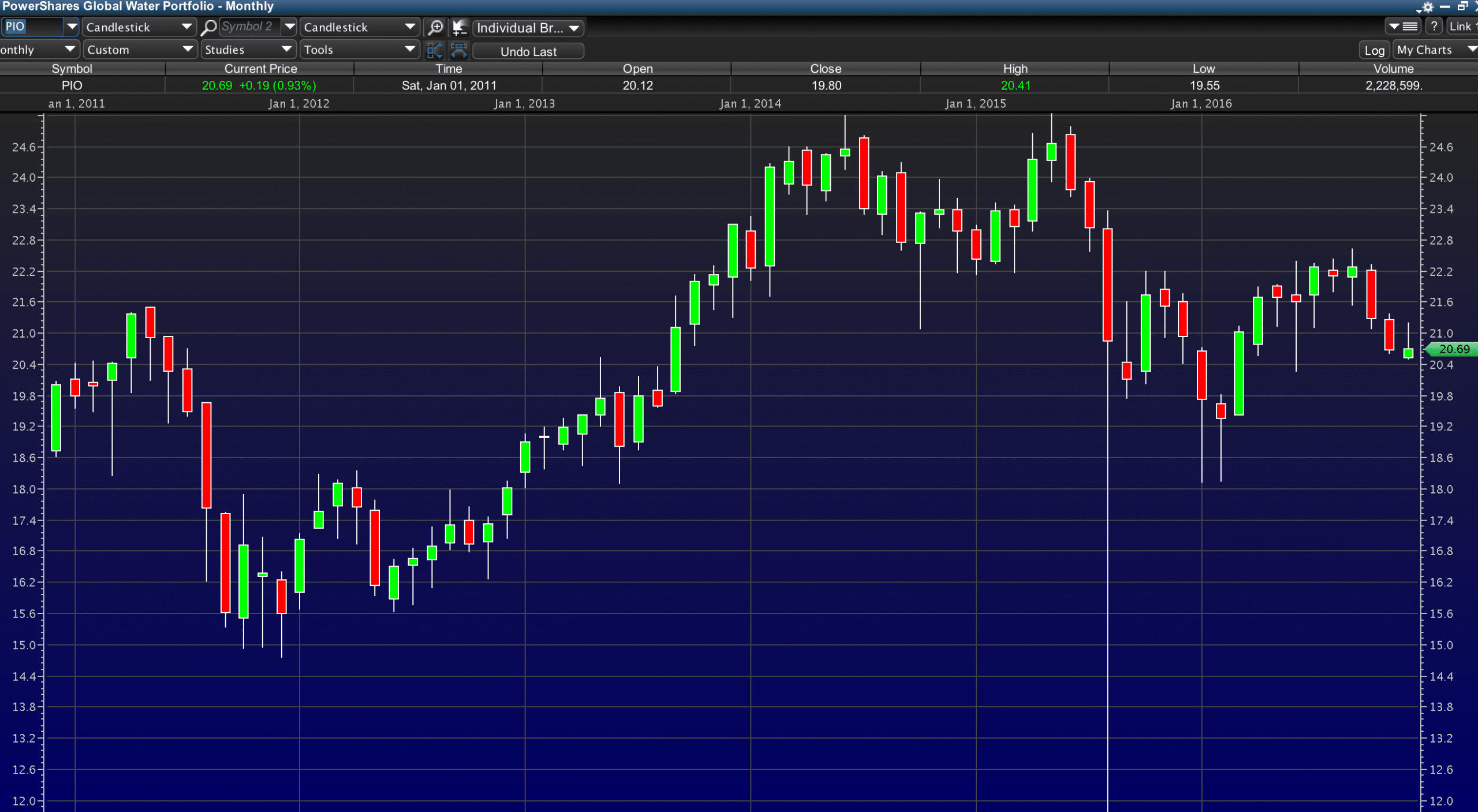 PowerShares Water Resources Portfolio (PHO): The largest Water ETF with more than $1 billion in assets. It also invests in companies providing potable water. In 2016 it was up 15% after a down year – losing 13% in 2015. 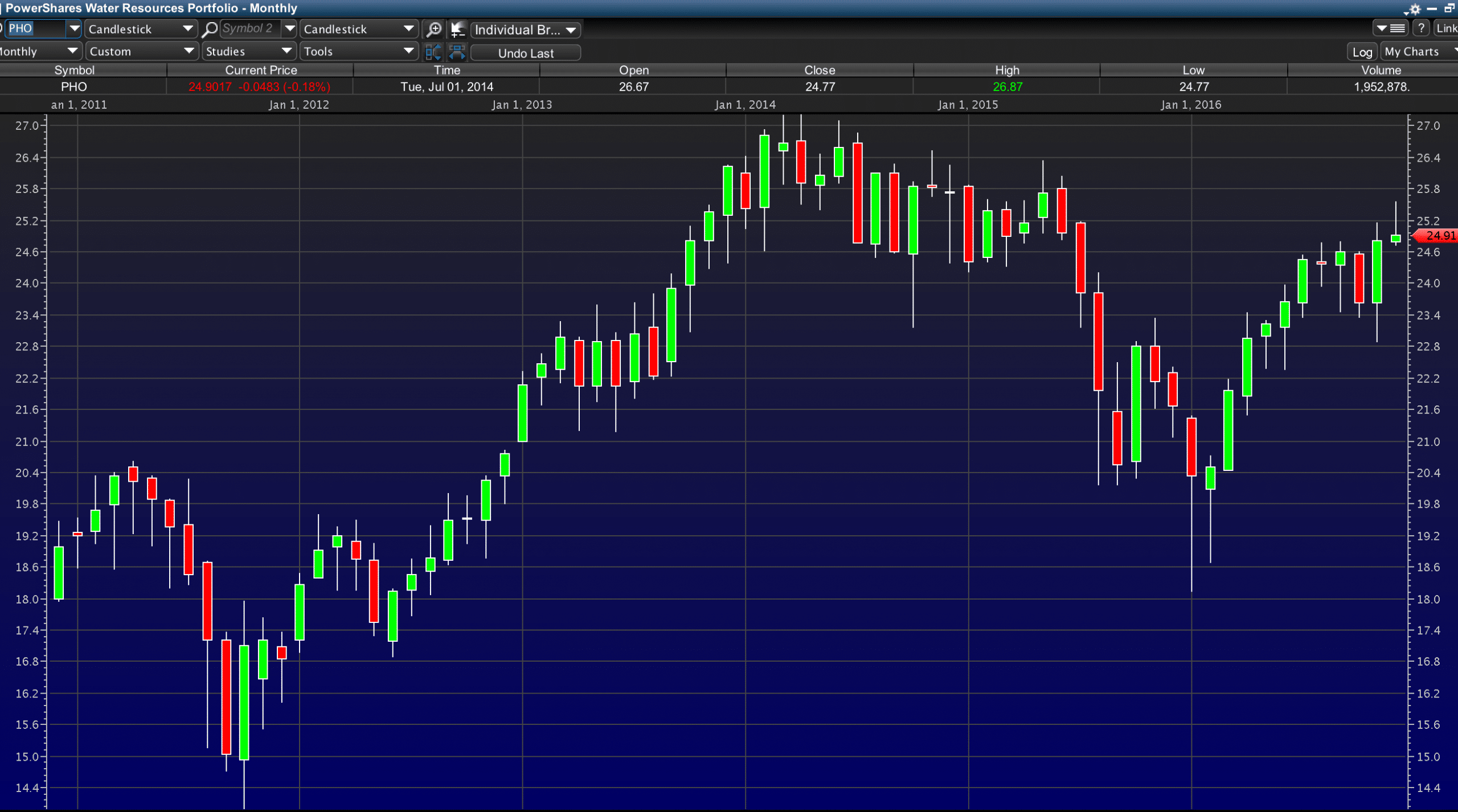 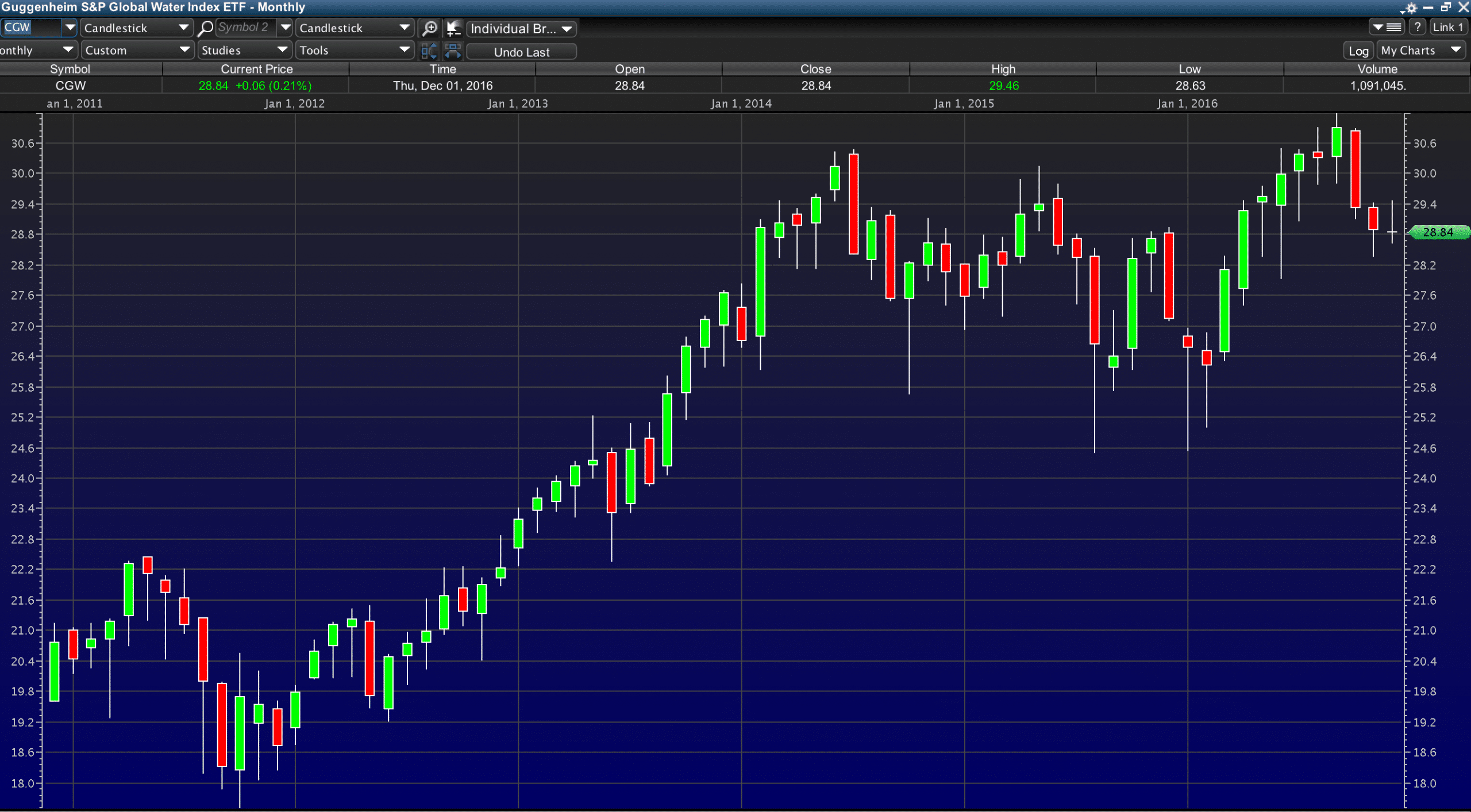 First Trust ISE Water Index Fund (FIW): Focuses on companies with waste water and potable water direction. It is up 34% this year and  92% over the last six years. 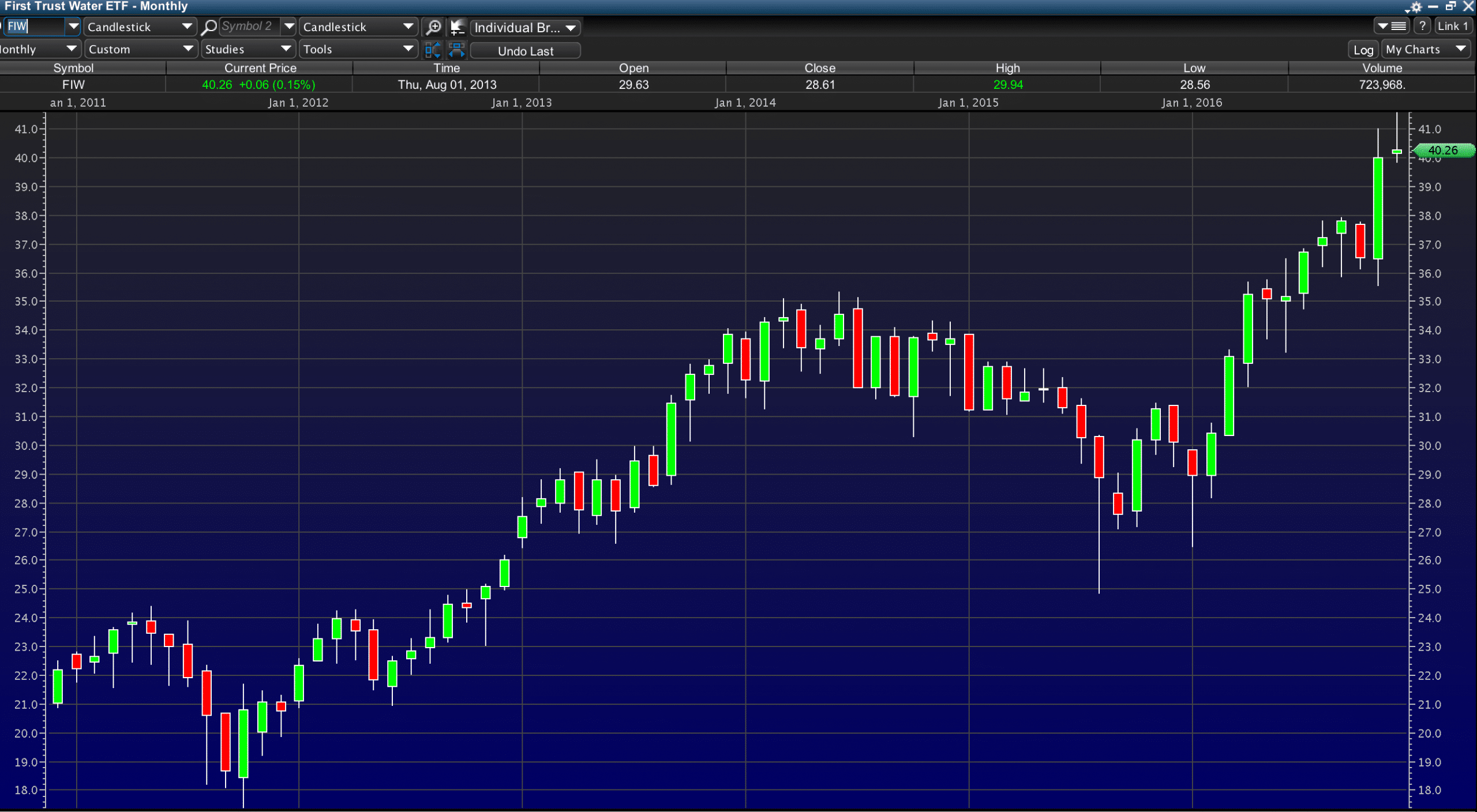 As you can see 2016 was a good year for the stock market and for these stocks with a focus on water. The ETFs did not perform as well. Looking at the last six-year performance – the Dow was up 80%.  Three of the eight stocks out performed the Dow by a lot, two about the same and three underperformed. The years the stock market did not do well were the years these stocks did better.

Please do not take any of the information on this post as a recommendation to buy the stocks or ETFs. This is simply an attempt to start a meaningful conversation on the blog about investing in water. What do you think is in store for the stock market and water stocks in 2017?  If you enjoyed this article please consider subscribing or following my on twitter @H2oTrends. 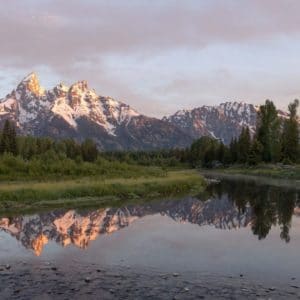 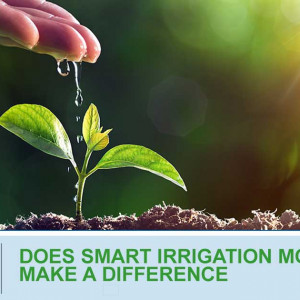 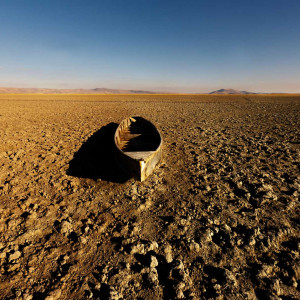 5 Red Flags That Will Motivate You To Conserve Water 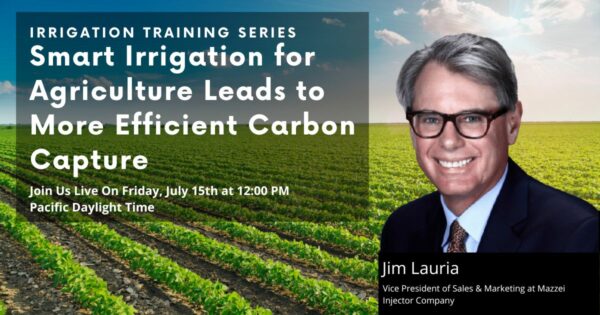